The Offices for the Federal Environmental Agency present a case study for sustainable building. Active and passive strategies for the reduction of energy consumption and carbon dioxide production are realised in an architecture that combines spatial and material economy with a deliberate stimulation of the senses.

The location in a former industrial area was selected to demonstrate the possibilities (and challenges) presented by a brownfield site. Contaminated land has been treated, and both a small existing railway station and a former gas appliance factory were integrated into the complex. The overall form of the new building was designed such that a large portion of the site remains accessible to the citizens of Dessau as a public park. The new building is entered via the “Forum”, a crescent-shaped space that draws the park into the building and acts as a link between the public areas, including a library and a lecture hall. The offices are then accessed through a landscaped, covered atrium, around which the various departments of the Agency are arranged.

The new building combines a compact volume and a high degree of thermal insulation with strategies of intelligent engineering and the use of renewable energy sources. In particular, it benefits from the use of a large geothermal heat exchange system and solar panels. Building materials were chosen according to their ecological suitability, the most visible element being a panel façade made entirely of timber, which is prototypical for Germany.

The Forum is a covered part of the public space accessible to everyone. It serves as the foyer for all of the Agency’s public facilities: the library, the exhibition and information areas, the auditorium and the reception desk. However, it is also a place in its own right, where exhibition openings, receptions, parties and similar events can be held.

On the ground floor, the ribbon of offices in the Atrium and Forum is interrupted by special-purpose rooms, known as the “boulders”. They are conceived as part of the park landscape and constructed of bush-hammered, exposed concrete with interior insulation. These solid forms house special facilities like the in-house print shop, filing units and archives.

The largest free-standing “boulder” is in the Forum and contains the auditorium. Like the cafeteria and the extension to the Wörlitzer Bahnhof, it also constitutes an element of the park. The shape of its ground plan takes up the flow of exterior space, mediating between the open and glass-roofed areas of the Forum, and leading one into the depth of the building. The auditorium is accessed from the Forum. Its interior walls are clad with acoustic panelling, and have sufficient depth to accommodate secondary functions such as control and interpreter cabins. 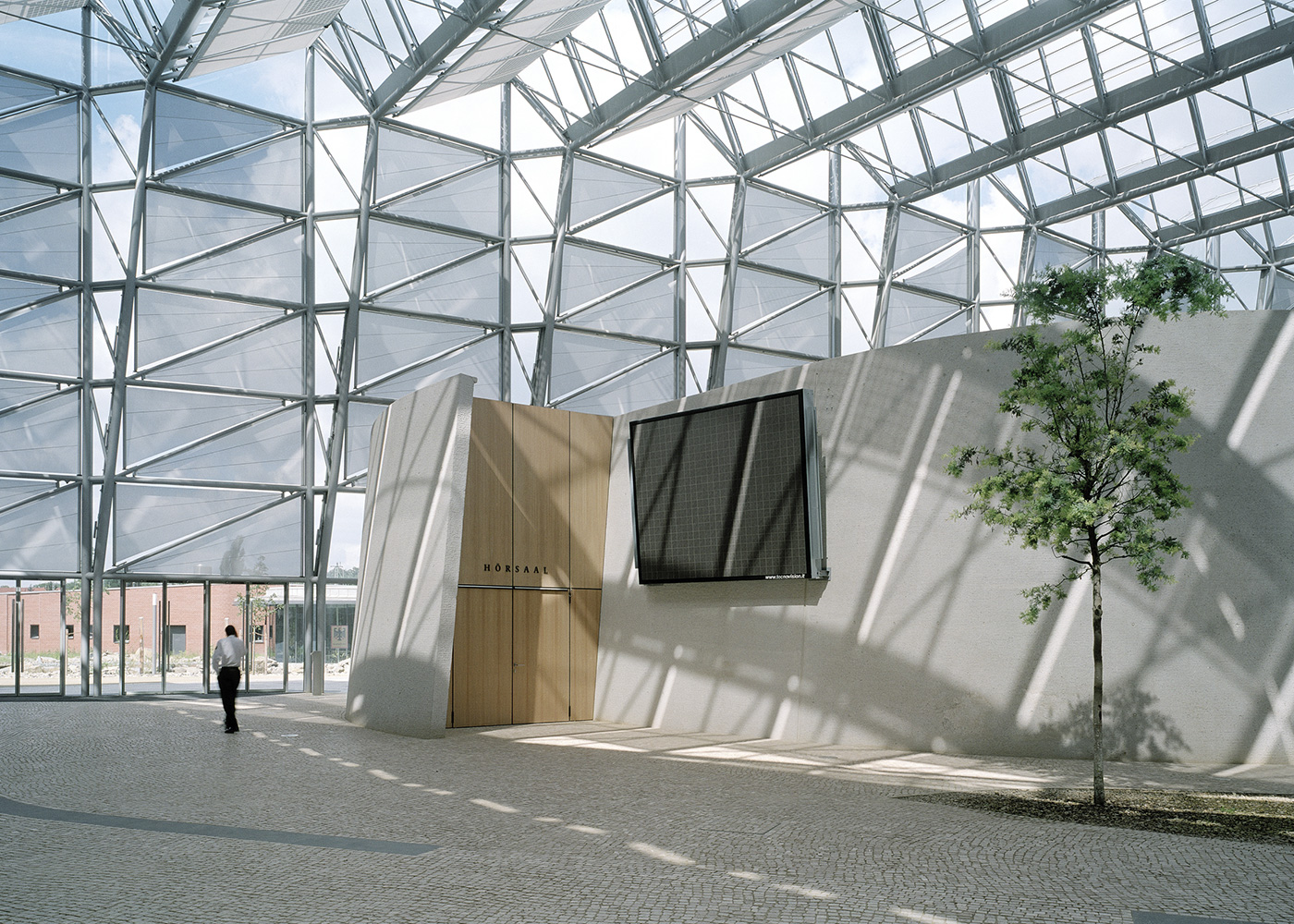 The enclosed courtyard known as the Atrium can be entered from the Forum only after passing through a security checkpoint. The large space of the Atrium, sheltered from the weather, serves as the internal public sphere. It forms the heart of the Agency, a generous circulation space, a visual focus and a communal space for communication, gatherings and informal work.

The circulation system of the office building, serving a total of 800 workplaces, works like a tree, with the large Forum as its root. From there the trunk leads into the adjoining Atrium, which is divided into four sections. At each boundary between sections there are three bridges, one above the other, along which paths branch off to the left or right towards the various departments of the Agency. At the end of these bridges are the departments’ reception areas, formed as bridgeheads, where the path again branches off to both sides. Whereas the bridges are fixed in their positions, the division of rooms among the departments can be varied to adapt to the ever-changing needs of the Agency.

The FEA’s Library is housed in the existing “Building 109” and in a new single-storey structure that connects the latter with the main office building. The old building was gutted: it was filled with a three-storey concrete “shelf” and its façade was renovated. The roof of the single-storey connecting hall rises to a height of around 15m in front of the old building and projects over ist roof, thus creating a top-lit volume approximately 8m wide and 14m high, which links the single-storey library space beneath it to the three-storey “shelf” The many openings in the reconstructed north façade offer glimpses from the connecting hall into all three floors of the old building, while opening up the latter to the main space via windows and balconies. The inclined ceiling of the hall encourages a convection current that allows natural ventilation of the library. From outside, the connecting hall appears as a striking sculptural form, visually emphasising the link between the old and the new buildings. Its textured brick skin picks up on the materials used in the existing industrial architecture. 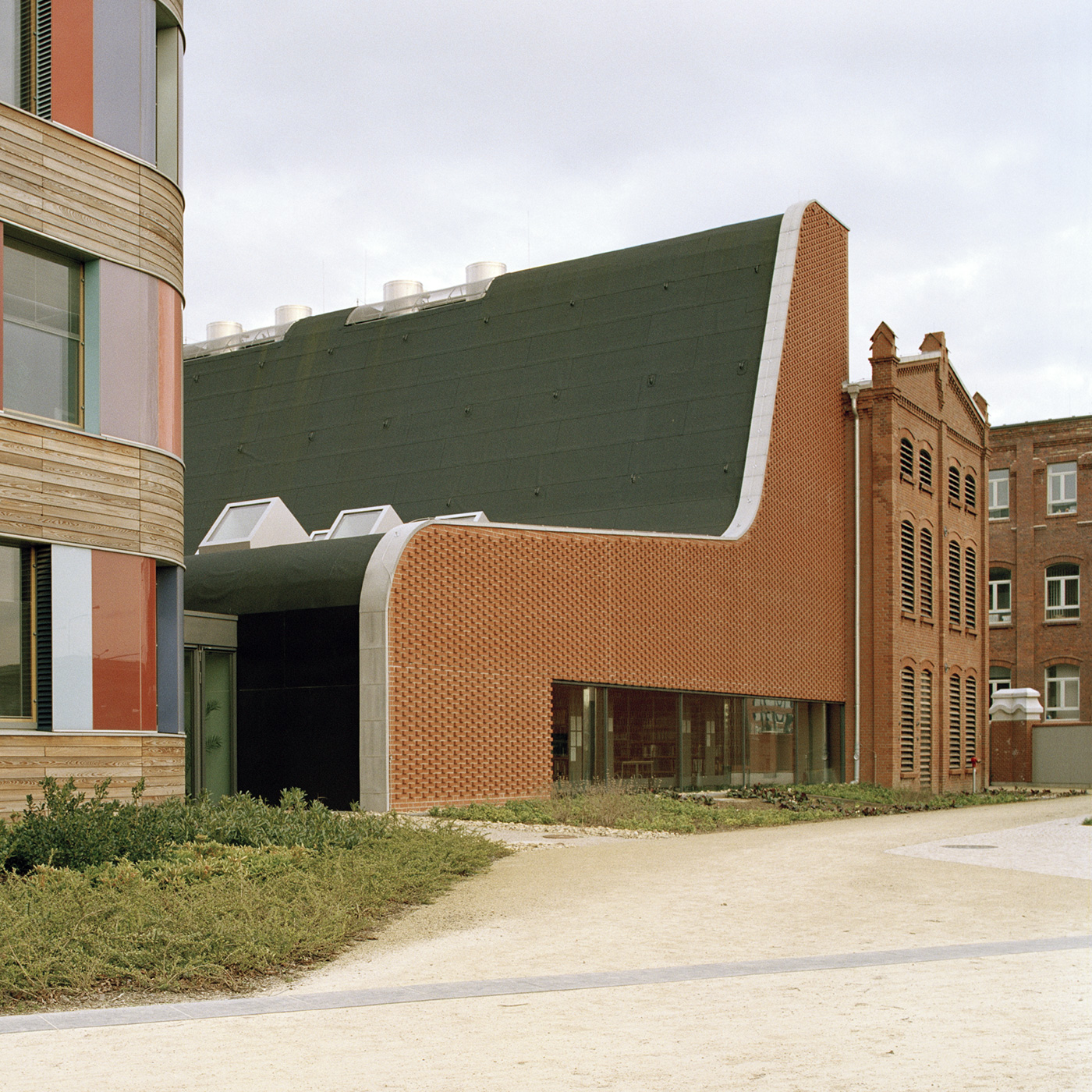 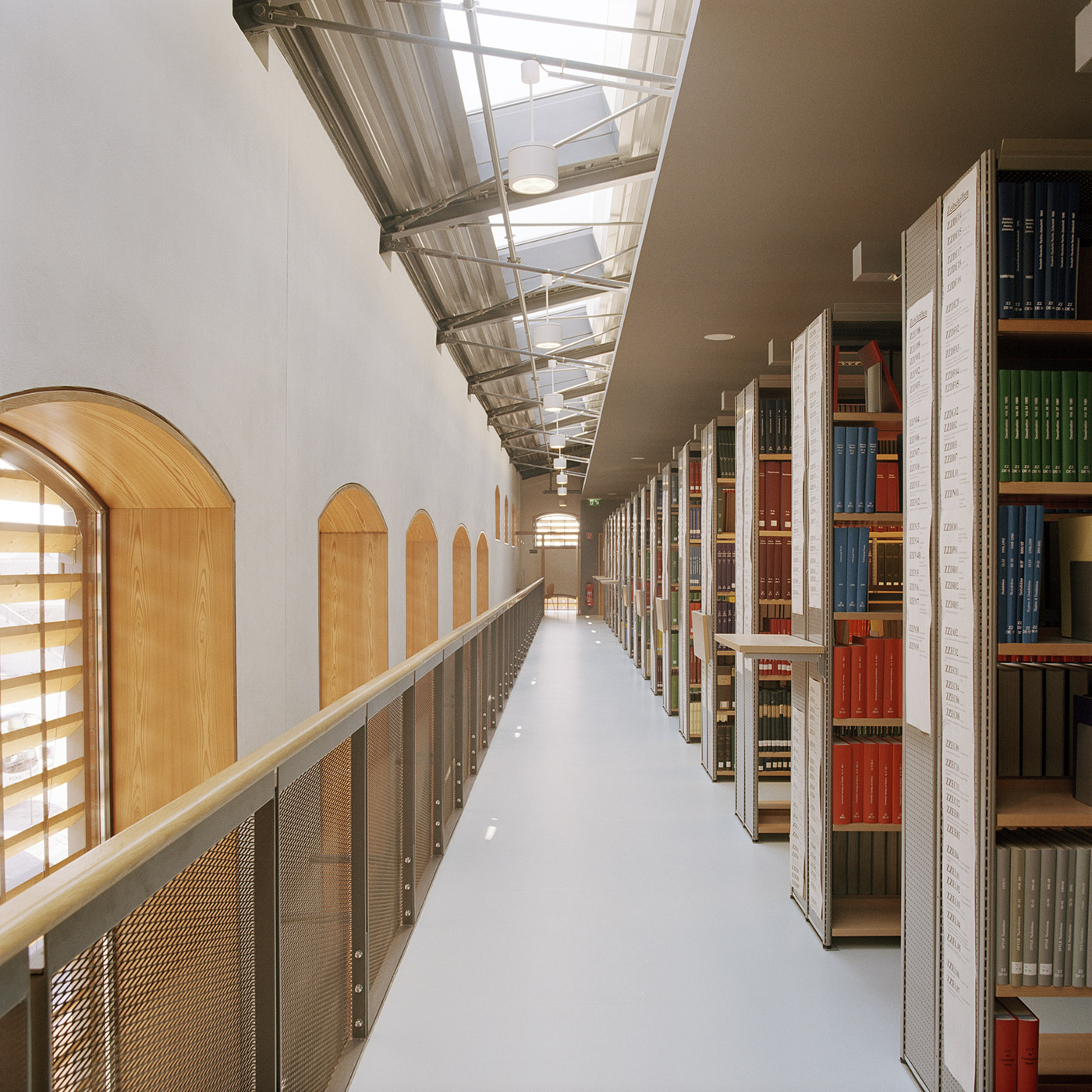 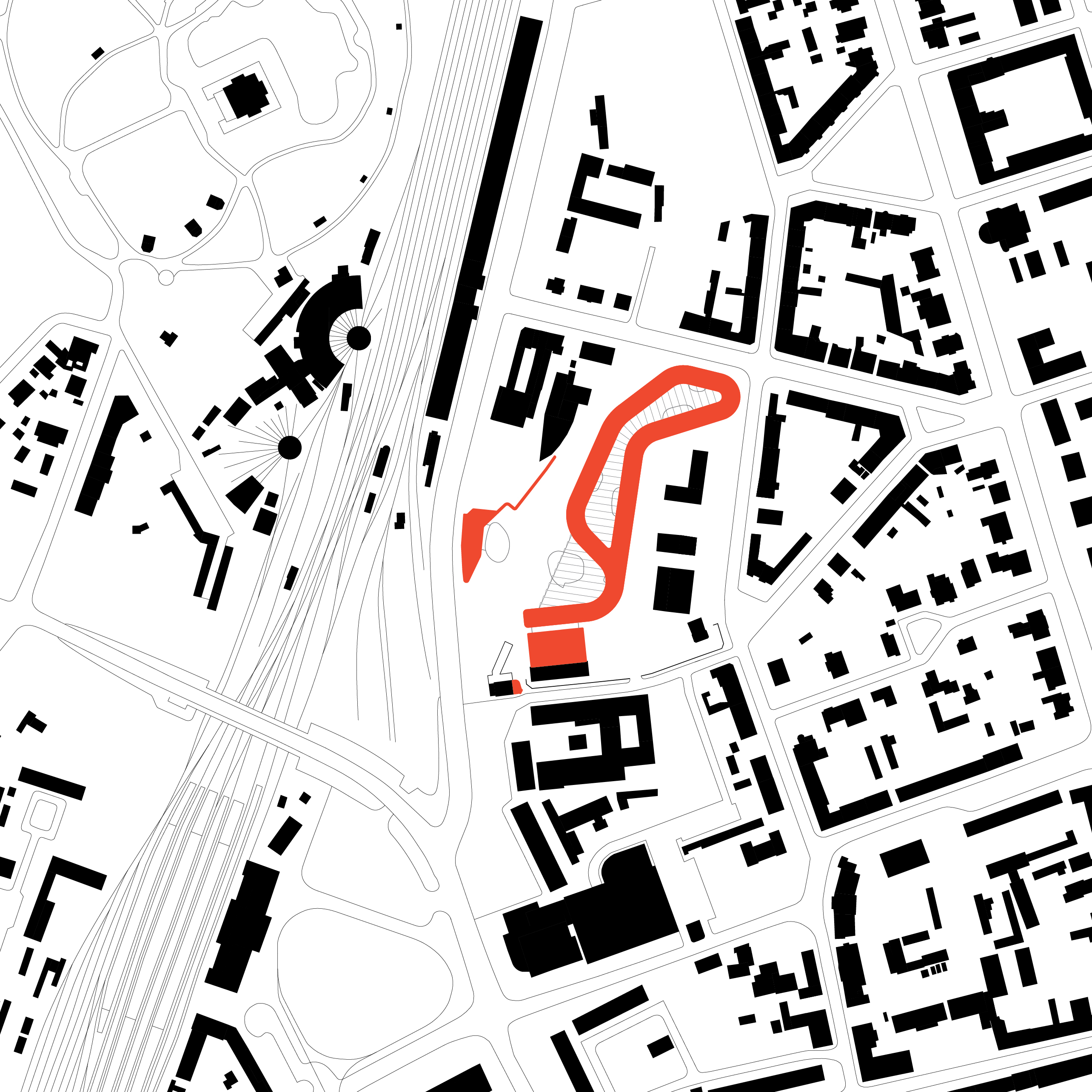 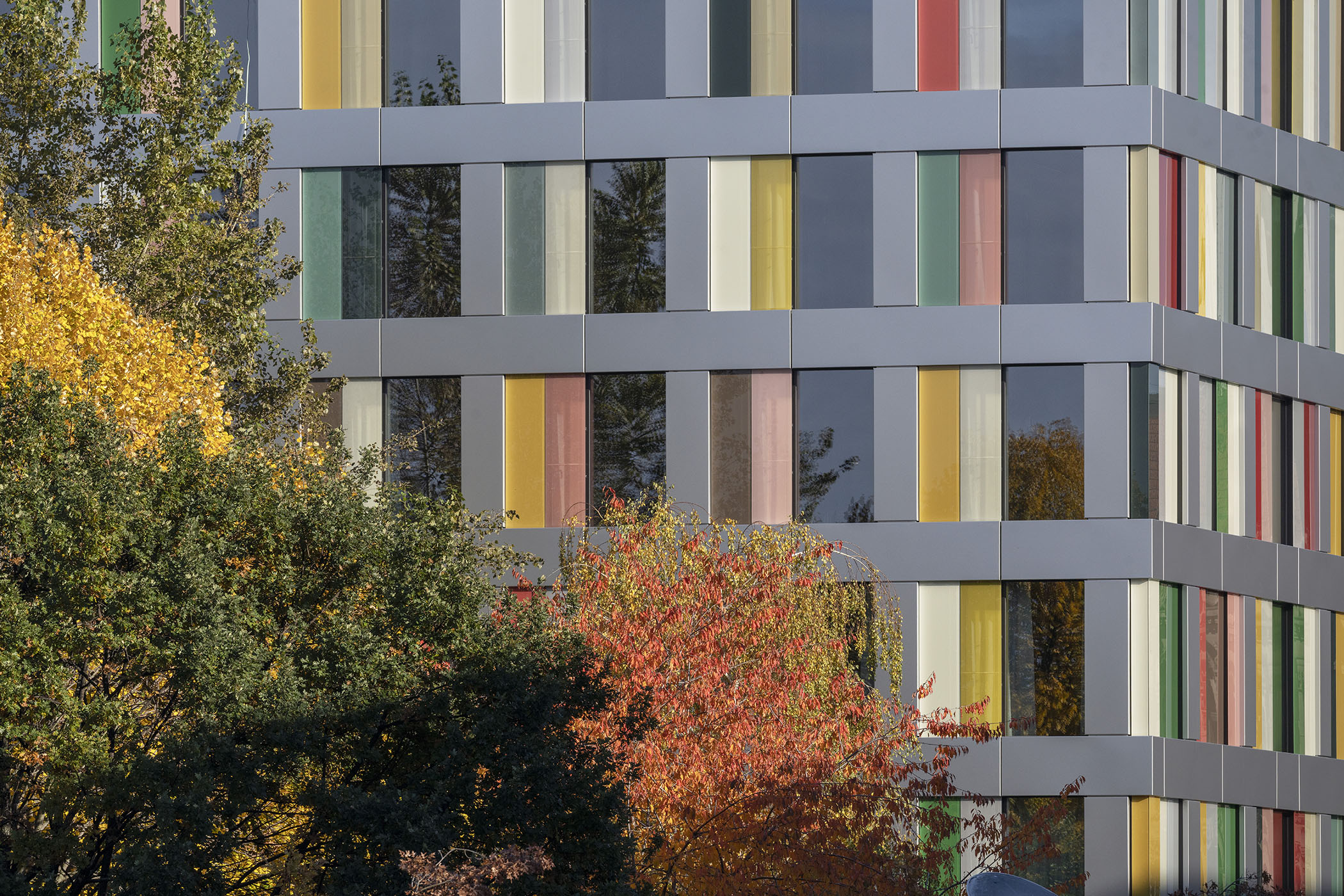 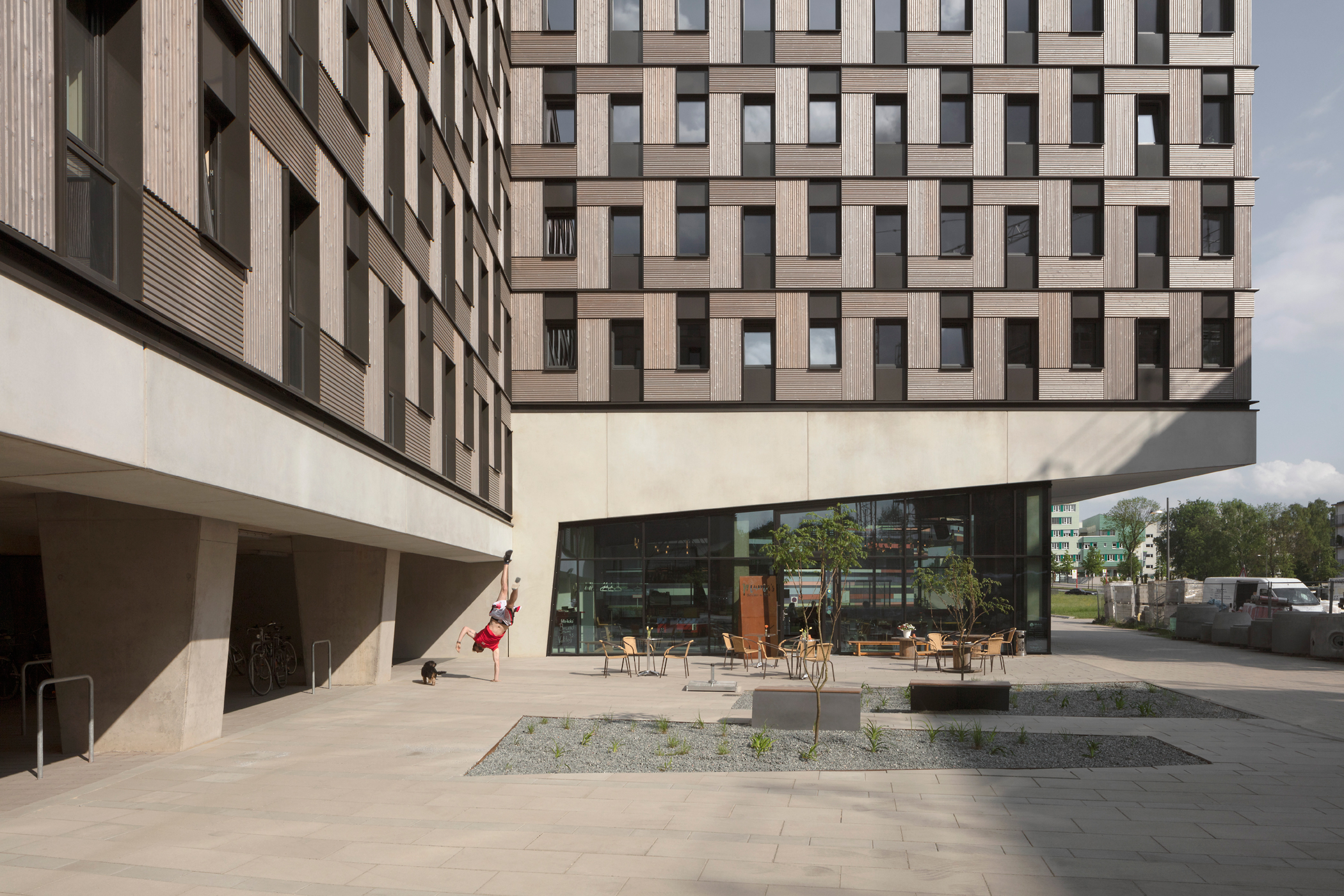 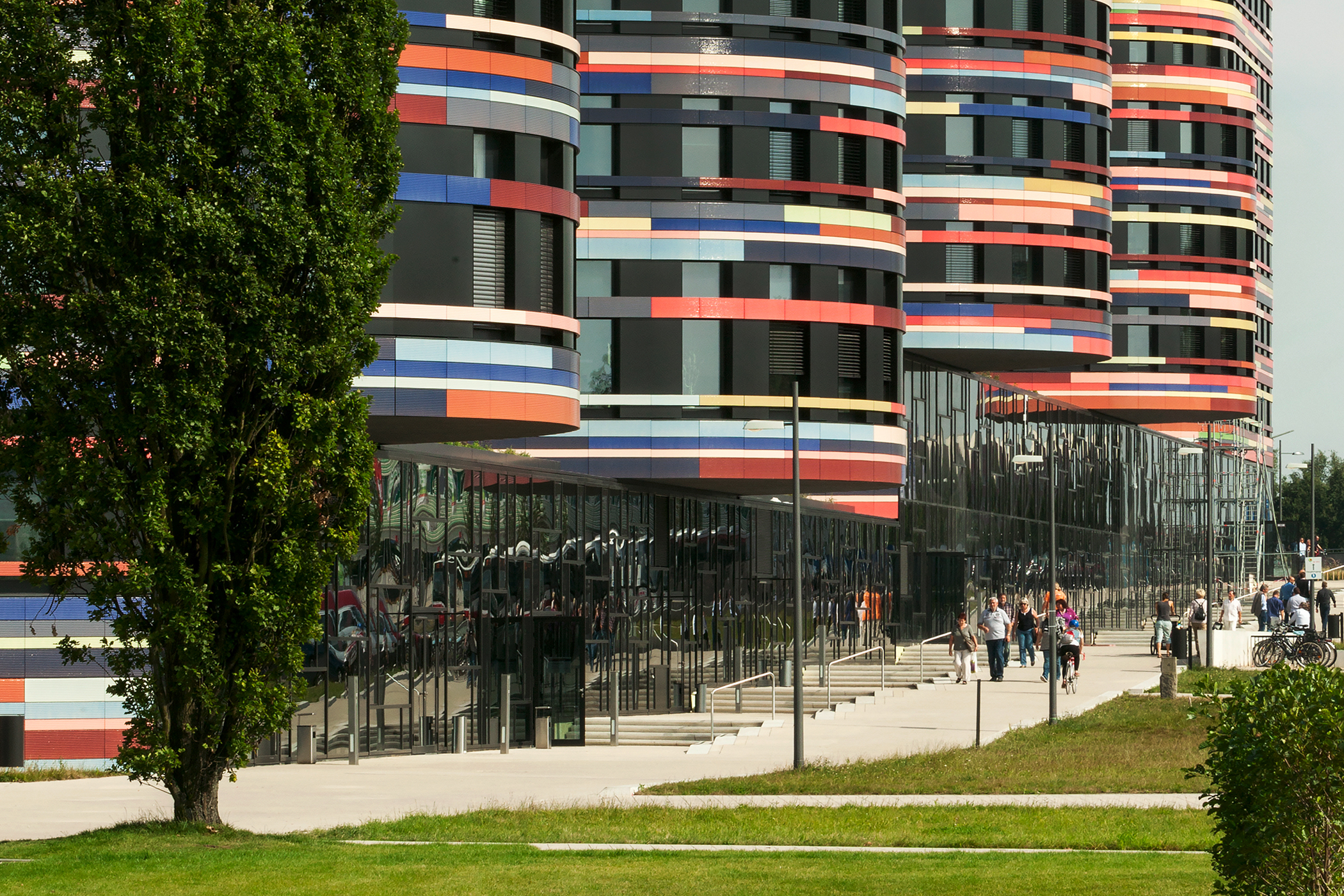